The Scottish Independent Advocacy Alliance have released the 5th biennial map of advocacy.

The document is a breakdown of funding and provision across Scotland from research conducted by the SIAA: membership organisation that advocates for independent advocacy in Scotland.

Key points;
• The most striking finding is that advocacy organisations have reported an increase
of 11.5% in the numbers of people they have supported during the 2015/16 year
• Statutory funding has decreased by 4%
• Advocacy organisations supported 30,500 people
• There has been a reduction is the numbers of paid advocates
• There has been a reduction in the number of volunteer advocates
• Advocacy managers have been successful in securing some funding for short term
projects to work with specific groups
• Advocacy organisations are prioritising people who are in crisis meaning that they
are operating extensive waiting lists
• Some groups who should be able to access independent advocacy due to mental
health issues are still not able to do so, including children and young people 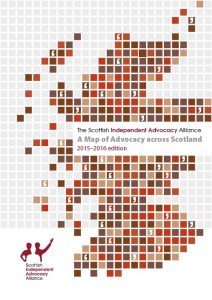