Back to Business for Still Game 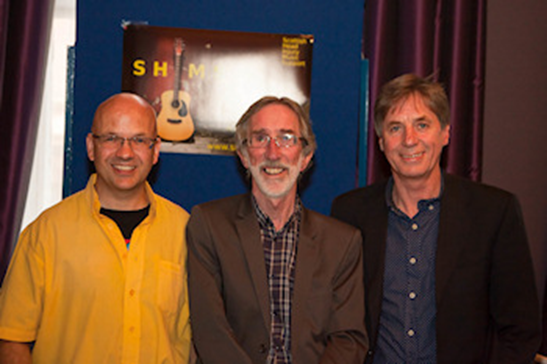 This month at ABI Café, we had a visit from Robin, Harvie and Balfie of SHIMS: The Scottish Head Injury Music Support group. All three have Acquired Brain Injuries (ABI) and they try to spread the word about both the visible and invisible effects of ABI through the medium of their music.

Prior to the car crash which left him with an acquired brain injury, Robin was a professional musician: a singer-songwriter who plays the guitar. Like many people who suffer an ABI, Robin had a long and difficult journey of recovery, but music remained important to him and he continues to write his own songs about his experiences, which he performs with Harvie on dobro and Balfie on guitar.

A couple of years ago, SHIMS recorded a CD with the Brain Injury Experience Network (BIEN) in West Dunbartonshire, and they have just completed another album of their songs called ‘Holding On’.

The folks at ABI Café were delighted the band came to play the songs for them last week, and the performance was very well received.

You can find out more about SHIMS at www.shimsgroup.co.uk and if you would like a copy of Holding On you can email shimsgroup@yahoo.co.uk